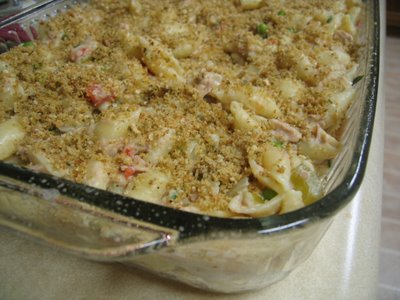 Even if you never grew up eating Tuna Casserole, you've probably heard the lore. One of the classic cream-of-mushroom-soup casseroles, traditional tuna casserole is even topped with crushed potato chips. Obviously, we can do better.

Many people seem content to use canned soup in cooking. I'm over the fact that it's unhealthy; what really bugs me is that it tastes bad! It really does. If you don't mind the flat taste of such "foods" like Taco Bell, Domino's Pizza or anything from McDonalds, you probably don't mind canned soup, which makes sense. Our palates have become increasingly narrowed and numbed with sodium, hydrogenated oils and high fructose corn syrup. I truly believe that the canned soup casseroles were born out of an effort to make comforting food quickly and mindlessly, but the cost (and I'm not talking $$$) is that we've lost interest and knowledge about what the real food is that we're after.

This version of Tuna Casserole is fast, easy, and one thing that the canned soup version is not: delicious. You are worth more than 's has to offer. You deserve whole mushrooms and real cream in your sauce. We deserve to enjoy these favorites without chemicals, trans fats and cheap ingredients that serve the lowest common denominator while corporations get rich. The food industry has done us a huge disservice, but we can take back our food. We can still make our favorites while proving that American food doesn't have to mean processed food in huge quantity. We deserve real food that does more than just make us feel full.

I can't help but get a little preachy when it comes to casseroles. They've gotten a lot of blame for the state of our country's health, as well as the boring American palate. But, with this version, I see light beaming out of this tunnel. Fresh tasting and comforting, it contains real vegetables and a fresh bread crumb topping. White wine perks up the cream sauce so it's not overly rich. I hope you'll enjoy it and feel good about it, too! Not always the biggest fan of tarragon, I really enjoyed it in this recipe and could have used even more. This is also the first Rachael Ray recipe I've tried in quite a while and was very pleasantly surprised! 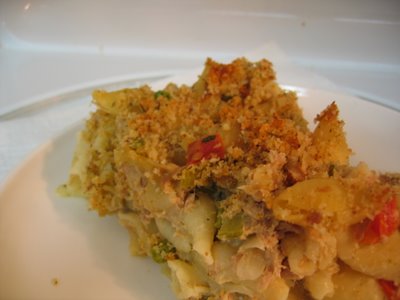 Bring a large pot of water to a boil. Salt the water well and add the pasta. Cook according to package directions, 8 minutes, I believe.

Tear apart the bread slices into small pieces and add to the bowl of a food processor. Pulse lightly until the bread crumb texture is reached. Place in a small bowl and mix with a small amount of olive oil or melted butter. Set aside.

In a wide sauté pan or high-sided skillet, sauté the onions, celery and bell pepper in the olive oil and butter until onion is translucent. Sprinkle with dried thyme, salt and pepper. Once the vegetables are fully cooked, sprinkle in the flour. Stir until a paste forms on the veggies and cook 2 minutes. Deglaze the pan with the white wine, scraping the bottom of the pan as you go. Let the wine cook down for 2 minutes.

Add the chicken broth and cream and bring the mixture to a simmer. Add a dash of cayenne pepper or hot sauce. Check seasonings. Stir in the flaked tuna, peas and tarragon and heat through. Taste again, adding more tarragon if you like.

Drain the pasta when finished cooking and toss with the tuna mixture. Pour into a greased 9x13 casserole and top evenly with the bread crumbs. Bake at 400 degrees F (200 degrees F) for 20-25 minutes, until lightly browned on top and heated through.

I actually am wanting to do a tuna casserole. Thanks for this one

Best of luck with your move! I do love this version of Tuna Casserole, it has a real sophisticated feel to it!

You must have read my mind! Thanks for saving me from that gelatinous gook. I'm going to try this tomorrow! :)

Tanna - I hope you get to try it! Let me know how it goes!

Melissa - Thanks! Moving is always a little rough!

Emily - I'm so glad! This makes a TON, so you might want to half the recipe or freeze half or something if it's just you.