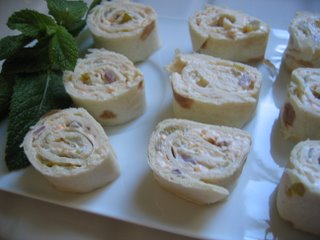 I was struggling to think of another quick appetizer to serve at our party last weekend and when Paul suggested those tortilla roll-ups thingys, I might have had trouble hiding a smirk and swallowing a snarky comment, even though I’ve never eaten them. “You mean those janky things that have diced peppers and I can just picture being on the label of a package of Philidelphia cream cheese?” But, after a few internet searches and the fact that I freakin’ got over myself, the idea sounded more and more appealing. After all, it was exactly what I was looking for: I had all the ingredients, they were easy, could be served cold and took very little time to put together. And, as I found out, they’re delicious!

So, I made two versions and happily, I don’t think either of them would appear on the side of a box of cream cheese. The first was a simple ham and herb cream cheese spiral and the second was a spin-off of the green chili version and was probably my favorite. It was a bit spicy and especially interesting for our international crowd, I think. It was dubbed American Sushi, which elevated these tortilla roll-ups to a whole new level of glamour yet unseen by flour tortillas and cream cheese. I think it made my husband’s night that his little piece of became des petites morceaux d'art moderne. 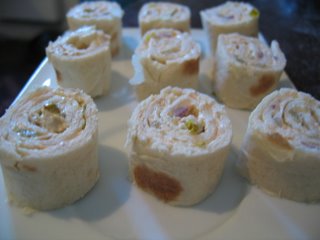 Mix together all ingredients except tortillas in a small bowl until smooth and everything is incorporated. Taste and add hot sauce to desired spiciness. Spread about ¼ cup of the cheese mixture evenly over the entire tortilla, leaving a small edge at the top. Roll up the tortilla, fairly tightly, but not so much that the filling is squeezed out. Seal the tortilla with a little of the cream cheese mixture. Wrap in plastic wrap and refrigerate until ready to serve, at least a few hours. Slice the rolled tortilla crosswise into 1 inch slices. Serve cut side up. These can be made the day before, but wait to slice until just a few hours ahead. Makes about 48 pieces. 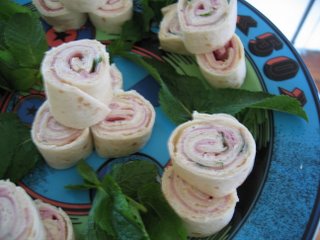 Spread a few tablespoons of Boursin over each tortilla (covering every surface) and sprinkle with parsley or dill. Place one slice of ham over the torilla (or more depending on the size of your tortillas…cover the suface.) Roll up the tortilla, wrap with plastic wrap and chill until ready to serve. Slice in 1-2 inch pieces.

If you can’t find Boursin, the recipe from The Passionate Cook sounds great, too. Mix a small amount of mustard into the cream cheese and spread that on the tortilla instead of the Boursin. Yum!

I've just discovered your charming blog, I love the idea for these rolls and they sound and look delicious!

My sister first brought these to a Thanksgiving dinner for appetizers I think and they're now an essential. We like to put some combination of raw spinach leaves, thinly sliced red peppers, sliced olives, grated carrots sometimes... whatever veggies we have around thinly sliced or grated. Mmmmm. I also like to use the flavored wraps as well.

Ellen - I really love all those ideas! I especially think olives would be yummy! It's quite a versatile recipe, huh? They are indeed delicious.

JenJen - Thanks for stopping by! I hope you can find some recipes you like. I'll check out your blog, too. =)

I think they're lovely and I would have been more than happy to snack on them.

Which brings me to my next point ... I notice that you keep neglecting to post your home address. It's like you don't want me to come to France, knock on your door and eat all the delicious food you make!?!

Thanks Ivonne! Ha. Next time, you'll be invited! =)